High Concept: Curator of the Eclipse: (the voidtech mecha, plus he's a void-mage) There's a human 'cult' of voidmonks that tend to the jumpgates. Grimm was impaled by something that allows him to connect to the void-mech, Eclipse. He is considered it's caretaker, but technically is not considered its owner. Invoke to use void magic (or general permission to use void magic), to make connections with the monks, or to be aware of void-stuff in general. Compel to be hunted as a void-corrupted, or be sought out as "someone already tainted by the Void."

Trouble: Shard of Darkness: Grimm has a literal piece of void shrapnel from near-death incident where he got sucked though a jumpgate into Voidspace. (This was the Extreme Consequence from said incident. Still, it allows his high concept, so, it's not going to 'heal'.) Invoke to resist minor corruption (as it's less than what he's exposed to by default. Compels include any kind of suspicion, minor corruption, to disrupt Hitech around him, make voidtech nearby a little more 'antsy', and any general source of corruption might be.

Adventure with Qarar: Where Ængels Fear to Tread (after being sucked into voidspace and surviving, he dares to go there.)

Adventure with Glimmer: Shadow needs both Light and Darkness (both lone wolf and team player...)

Free Aspect: "You know, Death sticks to some people." (Callback to Last Action Hero where Arnold falls in a tar-pit and just wipes the tar off.)

My Shard Aches: +2 to mark to notice signs of corruption and void use.
His Dark Materials: +2 Melee when armed with an aspect created with Lore.
Eldritch Abilities: Spend a fate point to substitute Lore for almost any skill (and equipment). (you can do this without the stunt, but, he's a mage, this is more just 'it's easier to justify' cause a wizard did it.)


Of the Dark beyond the Gate,
Whispered secrets lie in wait,
Broken shard of blackest Nyx,
I call You, Void-gear Eclipse!

Minor aspects: (These enable the effects below.) Head: All in His Mind: Summoning the Eclipse is a Lore roll with a difficulty equal to the number of shutdown systems the mech had when it was dismissed. This summons the Eclipse with all systems repaired, and normally can only be done once per conflict. (should summonable mecha be a character aspect/stunt, not a mecha system? I mean, after the mech is summoned this does nothing? Having a system to help dismiss it as well?)

Front Torso: Homogenous Dark-Mater Construction: The Eclipse is an Eldritch manifestation, not a mecha. It doesn't have servos, doesn't have to clank when it walks, can reconfigure its silhouette to better blend in, and the solidified darkness that it's made of is difficult to spot. It has Great Skulking unless injured. (IE: this system is offline.)

Back Torso: Ephemeral Systems Sacrifice: The mech is a mental construct as easy and fluid as any other thought. Sacrificing this system counts as a -6 consequence and the mecha is destroyed as if it were ablative armor. For a fate point, the mecha can be resummoned this conflict, However, only this system is repaired in that case. (The resurrection effect is also generally only once per conflict.)

Arms: Void-Bleed: The void-stuff of the Eclipse both focuses magic and bleeds off like corruption. +2 to Lore to create Void-magic based Advantages where the extra umph would matter (for example, it's easier to create large fields of darkness, corrode metal the Eclipse is touching, or make a makeshift void-support for a crumbling bridge.) This doesn't create a stronger force, just more of it over a larger area.

'Legs': Nightmare Motion: The Void material of the Eclipse can make friction what it wishes. It can cling to anything it can touch and glide at high speeds as if skating on ice (Or both at the same time, cause magic...). Combined with the variable weight, it can cling to ceilings and walls without destroying them, and can avoid setting off traps designed to be triggered by the weight of a mecha. Overall, this grants great Zeal to make these things happen.
Top 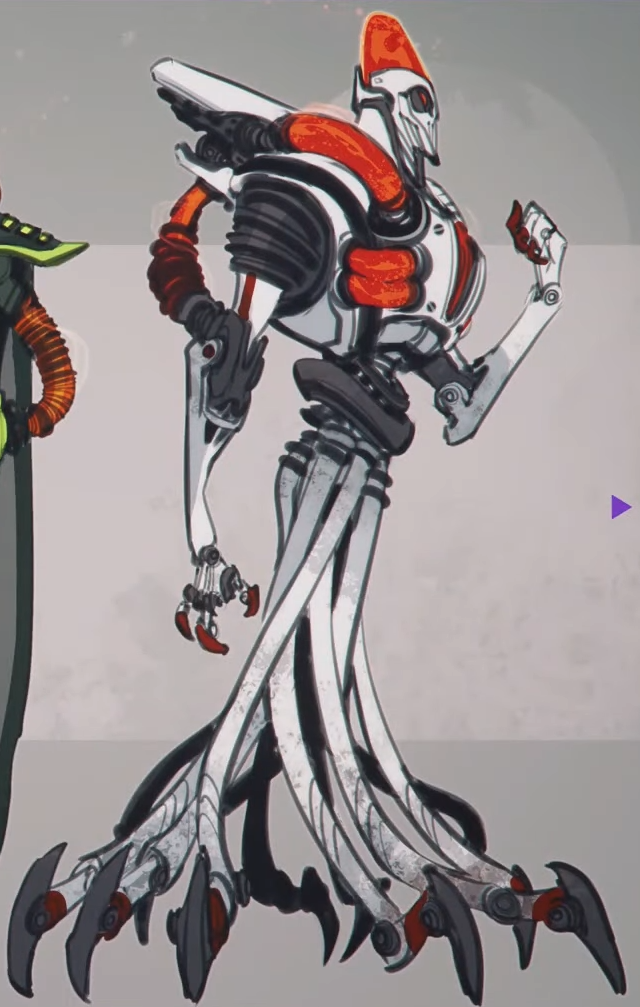